Shopify POS reviews 2021: Is it BEST for your store? 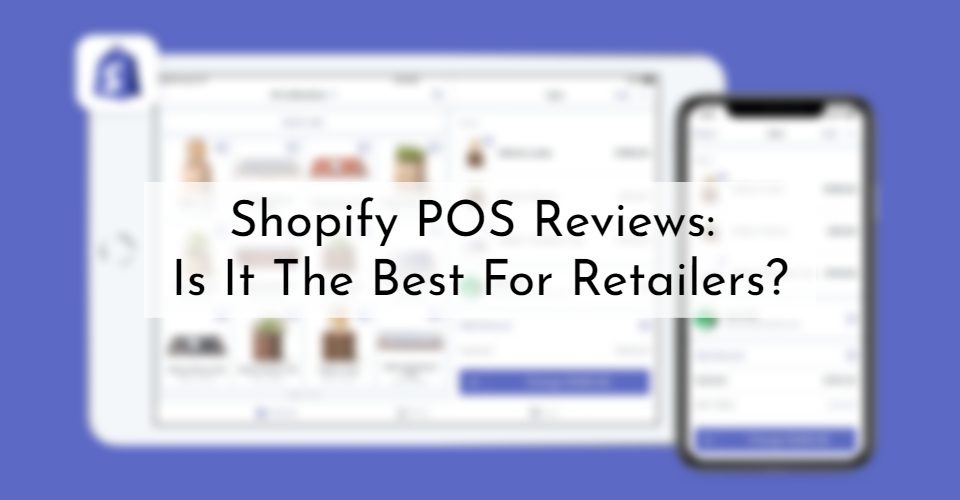 Aside from fundamental functions of an eCommerce platform, Shopify developed many free additional services such as Product Reviews or Email Marketing, and the most outstanding one must be the Point of Sale system.

Thousands of stores are experiencing the omnichannel journey with Shopify POS. Yet is it your ideal choice for a seamless POS app? Today, we will provide you with thorough Shopify POS reviews so you can decide on your own!

The beginning of Shopify Point of Sale

With the booming of online shopping, store owners have quickly understood the importance of connecting their online and offline platforms. This innovative idea is not only the trend among merchants but also eCommerce platform providers. A way to differentiate a great eCommerce platform with others is its ability to develop, provide and integrate with various supporting tools.

If you haven’t noticed yet, many store owners are now shifting to Shopify. More than one million businesses in 175 countries are powering their eCommerce business by Shopify. Flexible and user-friendly, this platform has risen to be the favourite choice of retailers all over the world.

Catching up with the movement of the market, since 2013 Shopify has released its built-in Point of Sale service within all Shopify plans.

This free-of-charge additional service has shown its effectiveness in bringing more merchants to Shopify. After 7 years, the app has been upgraded constantly to deliver the best omnichannel experience for both sellers and buyers.

How to set up?

All you have to do is enter the Shopify App store then downloading the Point of Sale app by Shopify. When the app is installed into your eCommerce store, it will auto-fill up products that are available in your inventory. However, there’s a limit on products you can list on the POS app (which is different from products you can create in Shopify). The number is based on the Shopify pricing plan you subscribe to.

After adding the products, you need to set up tax rates and enable payment gateways. These crucial steps guarantee that your checkout will run smoothly and align with the laws of your region.

Tax will be auto-calculated in receipts and invoicing process. For payment gateways, you can directly use Shopify Payments – the payment gateway developed by Shopify that supports some other gateways. However, if you want to integrate with other third-party gateways that are not available in the Shopify Payments list, you will need to pay for extra fees.

The Shopify POS is compatible with various retail hardware, such as cash drawers, iPad stands, receipts printers or barcode scanners. This ensures a seamless experience between the online system and offline tools.

For store owners in the United States and Canada, it’s a piece of cake to purchase with Shopify POS: Customers only swipe their card to make a transaction.

The same goes to sellers from the UK and Ireland, since you can take contactless payments and credit cards using the EMV-compliant Tap, Chip, and Swipe card reader.

For stores that are not in these regions, the process can be a little bit more complicated. You’ll need to apply to local banks for the permission to use POS hardware. It’s important to deeply research your local law to ensure you can run your Shopify POS system frictionlessly.

What Shopify POS app can do for you?

As a cloud-based POS system, Shopify Point of sale app will equip your store with multiple POS features and customization. This POS software is the perfect solution for small and medium businesses, and Shopify has plans to upgrade them to fit with bigger brands.

Shopify Point of Sale app comes with a wide range of features, yet there are huge differences between the Lite and the Pro version. To help you differentiate which features are available on which plan, the (-) indicates functions that are in both versions while the (+) is only for Pro.

Below we’ll list the all essential features that a Shopify POS provides.Compatible with PC and iPad

+ Save and retrieve carts

With these POS features, Shopify Point of Sale has once again confirmed its usefulness in creating omnichannel experiences for retailers. The POS system ensures:

As we mentioned before, Shopify POS is compatible with many POS hardware. Yet with each Shopify plan, you have an option for a “Retail Kit” – an additional package building especially for retailers. For $49/month, you will have a full kit consisting of:

Shopify POS opens to diverse integrations. The provider understands that to create a perfect POS system, it’s vital to make it work well with other software. Some apps that are compatible with Shopify POS are:

On the other hand, if you’re good at coding, you can integrate your own apps using Shopify API.

Like many reliable providers, Shopify offers its user free 24/7 support. You can contact the Support Team via Live chat, email or telephone. With years of experience, the Shopify Support Team can solve your problems at ease. However, with the huge amount of users, the team cannot process every request quickly.

There are 2 Shopify POS pricing plans: The free Lite plan and the $89 per month Pro plan. The differences between these 2 plans lie on the additional features that the Pro version has. Again, we highlight the extra POS features of this paid plan:

For Shopify Plus stores, the Pro version is already included in the system.

Many users consider that if you’re looking for a practical well-functioned Shopify POS system, The Pro version is the perfect choice for you!

Aside from amazing features and professional customer services, what store owners care the most is whether it works in real-life.

Shopify POS receives controversial reviews from users. In its app store, the app only gets 2.1 stars rating. The feedback is quite harsh from users, most of them are for the Lite version.

The angry reviews have been increasing since Shopify decided to move some features of Lite version to Pro version, as well as raise the price of the Pro to $89 per month.

Good Cheese rated 1 star and said that “I’m disappointed we’re having to switch over to a paid POS system just to retain the existing functionality offered with the previous App. It wouldn’t be so bad if we were getting more value out of it but, none of the features they’ve introduced is particularly useful in a retail setting. I would happily trade in the ability to customize my home screen for the ability to process refunds in a practical manner.” (Nov 17, 2020)

In the case of satisfied customers, they happily confirmed that “This is a great tool to keep both of my in-person and online sales seamless! The hardware options are great too!” (Brew Lucky, Oct 2, 2018)

To quickly solve this problem, the Shopify Team has continuously updated the app and actively worked with sellers to fix the issues. For instance, Jennifer Furniture left a review of 3 stars that wrote: “Shopify team reached out and worked with me to resolve some of my issues. The new version is looking promising. Crashes have reduced and returns issue is resolved. Going from one star to three. There are still issues but a step in the right direction.” (Jul 21, 2020)

The reasons behind these complaints are:

In conclusion, what is the overall Shopify POS review?

Point of Sale app by Shopify is the go-to choice of hundreds of merchants around the world. Its popularity is the result of amazing POS features, easy customization and professional customer supports. However, there are still rooms for improvement. From practical usage and customers’ feedback, Shopify is upgrading the app to deliver the best omnichannel experience for both store owners and their customers. Two factors that Shopify should focus the most are technical issues and Pricing plans.

Overall, we give Shopify POS the point of 8 – A well-functioned and quite fancy POS system that still has room to improve.

If you’re looking for a much more suitable POS solution for your retail business, you can take a look at other providers. We highly recommend the ConnectPOS app for Shopify! ConnectPOS is unique compared to other POS software, such as PC and mobile devices (iOS and Android) compatibility or quick 24/7 support. Their price starts at $49/month and the plan covers all essential POS features.

We hope that with these detailed Shopify POS reviews, you’ve had a vision of what you need to start your omnichannel experience. Contact us now for more information about the best POS for your business.