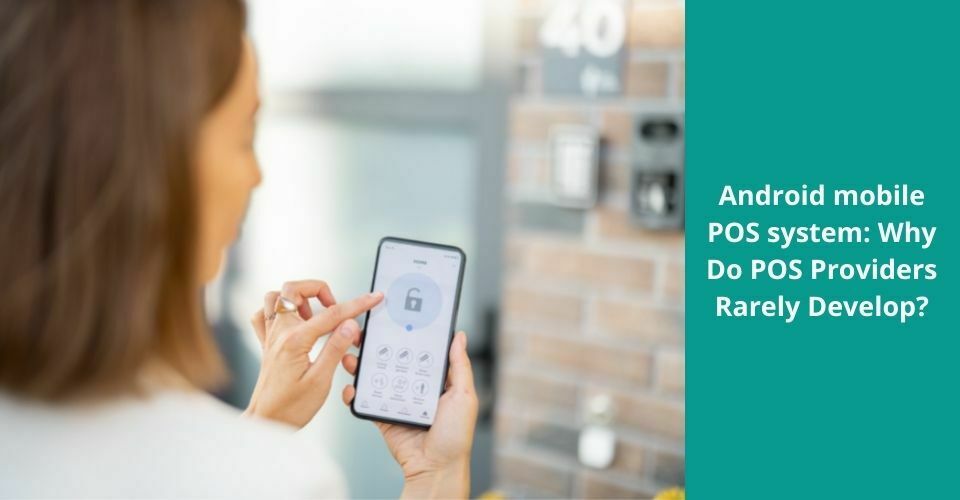 According to Finances Online, the total mobile POS transaction value was over a million in 2020. It shows the fact that more retailers opt for using mobile devices instead of a giant POS hardware to process the transactions. However, the majority of mobile POS apps (mPOS) are compatible with the iOS operating system, instead of Android. Let’s find out why retailers hesitate to use an Android mobile POS system.

What is a mobile POS app?

A mobile POS application is a portable POS (Point of sales) system on a smartphone or tablet. It can process payments for on-the-go businesses, such as fast food, coffee shops, and restaurants.

How does a mobile POS app work?

The simplest version of a mobile POS app can operate as a stand-alone device that’s linked to the retailer’s bank account to process payments. Depending upon the software, mPOS varies from the payment processor to the fully-integrated POS system with various functions, such as inventory and customer management.

Why more and more retailers fall in love with a mobile POS system?

So, the mobile-driven POS system has become more and more popular among businesses due to its considerable advantages. Here is a shortlist of mPOS benefits that we have summarised to get you an insight.

Traditional POS system is worth its weight in gold because of not only its importance to business but also its expensive price. Contrastly, a mobile POS app only requires a tablet or smartphone instead of a bulky stationary POS terminal.

As mentioned above, some POS vendors integrate the whole POS system into the mobile device. Mobile POS app now can offer a wide range of functions beyond receiving and processing debit and credit cards. You might see outstanding features in an advanced version of mPOS, such as managing inventory, storing customer data, giving comprehensive sales reports, and managing employees.

One of the biggest drawbacks of an on-premise POS system in comparison to mPOS is the size and weight. The old POS system was rooted in one spot and you could not move them.

Thanks to mPOS, a salesperson now can greet customers at the door, bring a POS system to a customer’s location to help the customer search for items, scan barcodes, and do checkout.

Why do most mPOS developers not prefer Android?

Most mobile POS apps work only on the iOS operating system instead of Android. That’s because Apple is still leading the US smartphone market with a 40% market share in the third quarter of 2020 according to Counterpoint Research.

More importantly, Android is more targeted by hackers, so many POS providers are concerned about the security of this operating system.

Android relies on open-source codes not a closed system like Apple’s. Open-source code is designed on purpose to be publicly accessible—anyone can see, distribute, and even modify the code when they see fit. It means that owners of Android devices can play around with their phone’s and tablet’s operating system. If Android users tinker too much with the device, there will be weaknesses in security. At that time, hackers can find that device because of open-source software and attack the vulnerability in that code.

Even so, there are still plenty of businesses that use the Android operating system, especially in Asia. For instance, according to StatCounter, the market share of Android in the most populous market in the world, China was over 71%, while iOS is at 27%. In southeast Asia, Android was even dominant over iOS.

That’s because Android is considered to be cheaper and more independent than iOS. If a customer chooses to use Android, there are various options available at different price points, such as Samsung, Huawei, and Nokia instead of a costly Apple device. Besides, a user of iOS also heavily depends on Apple’s server.

An mPOS plays nice with both iOS and Android

ConnectPOS is a mobile POS system that helps you to sell on the go and manage multi-stores from anywhere. It is compatible with all mobile devices (iOS and Android) and PC (Windows and Mac OS) for retailers flexibly using any smartphone or tablet to run a POS system.

Mobile POS apps stand for a reason. Thanks to its mobility, retailers are no longer tied to a countertop register and enable them to communicate effectively with customers. However, store owners should take into account picking a well-fitted mPOS that can run smoothly on your mobile operating system (iOS, Android, or both).

Contact us for more information regarding the cloud-based POS system and global standard service!