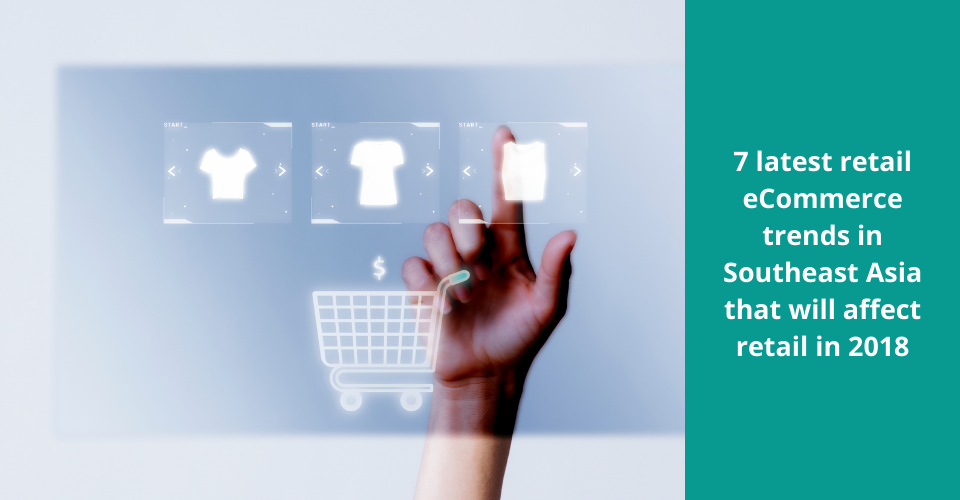 While Amazon continues to assert dominance over the e-commerce scene in the western world, Alibaba has been increasing their influence over the East. Recently, Alibaba has been setting their sights further afield from their native China, with Southeast Asia becoming a key focus of their investments. Amazon has also made their way into the region, leading to a competitive e-commerce landscape.

With 2017 drawing to a close, now is the time to reflect on the changes we have seen this year and look ahead at some important trends that may influence e-commerce in 2018 for Southeast Asia. Looking back, there were some significant milestones that were surpassed in the region:

While e-commerce in the region is not as mature as in other markets, it is making great strides to modernize with more options becoming available and better infrastructure being put into place.

Looking again at Singles Day, it’s clear to see that mobile shopping was an important part of during the sales event. Though it has seen little penetration outside of Singapore, Mobile Payment is beginning to show promise.

Despite the bigger players such as Android Pay and Apple Pay not being available outside the likes of Singapore and Malaysia, smaller more regionalized alternatives are now starting to pop up throughout the region.

In Indonesia, Ponselpay is a big player, offering a unique electronic payment service. Meanwhile, Thailand has seen success with Line Pay, which has joined with Rabbit Card to provide a cashless alternative for their transport system, as well as in-store payments. Finally, the e-payment giants Alipay and Wechat Pay are beginning to make their way into the region from China. Aimed mainly at Chinese visitors and tourists, these payment options are becoming more widely available in the larger hotel and restaurant chains. Their parent companies, Alibaba and Tencent respectively, have also begun investing in the local options.

Adding to the trend this past year of diversifying payment options, 2018 will see mobile wallets come into action with greater availability amongst retailers in store, online and in app. As customers begin to see the value and convenience offered by mobile and digital wallets, usage will increase. With Alibaba and Tencent bringing their influence into the region, expect investments into the the mobile payment market to increase, reaching an expected $32bn in value by 2021.

A recent study from L2 found that a quarter of shoppers would abandon a cart online if same-day shipping wasn’t available, indicating that customers are becoming increasingly expectant of short delivery times.

Same day shipping has made some headway this year, with Lazada launching their Lazada Express service in the Philippines, joining Singapore. The service is however limited to the larger cities and surrounding areas.

In Singapore meanwhile, Lazada Express has been joined by Amazon Prime Now which made its way to the country during the year, the first in the region to receive Amazon’s same-day delivery solution. Singapore’s small size and modern transport infrastructure make it an ideal location for these services, but it will likely take some time before it becomes commonplace throughout the region.

There are some smaller, localized retailers and marketplaces that currently offer same day delivery, but on a much smaller scale and, again, relegated to the larger cities. Over the next year, customers in the region should expect to see some more opportunities for same day delivery, especially as competition mounts between the bigger players like Lazada and Amazon.

In the meantime, app-based logistic services like Uber Deliver and GrabExpress can facilitate same day deliveries on a small scale. Lalamove, another on-demand delivery service, offers local delivery in an average of 55 minutes in a selection of cities, showing the potential of same day delivery in the region.

2017 has seen many e-commerce innovations that have been bringing customer experiences in Southeast Asia to new heights.

Courts Singapore, a large electronics retailer has put more than a year into researching and designing their new retail concept and customer experiences. With the help of SmartOSC, COURTS’ long-term e-commerce partner, the relaunched COURTS e-commerce site augments the transformed retail experience in the physical stores, serving a wider range of customers with a seamless connected experience across online and offline channels.

However, there are also cases where businesses have struggled to find their market and remain relevant to their clients. Carmudi, a marketplace specializing in selling new and used cars, claimed to be successful in many Asian countries, but later sold themselves to Fram^ – a Swedish-Vietnamese IT service provider and venture builder – in order to restructure and innovate the way they operate.

Over the last year, companies have been looking to create a seamless shopping experience for their customers, to accommodate their changing shopping habits. In the coming year, implementing an omnichannel approach to sales and customer services will become even more important.
Retailers will need to step up their mobile experience and coordinate between their online and offline channels to bring in their customers. In creating a consistent and organized system, they are able to better track and connect their customers’ experiences. It creates continuity for customers, giving them more flexibility in where and how they shop. As mobile commerce increases, so too does the necessity for cross-channel capabilities.

Business Insider Intelligence reported that the use of messaging apps has surpassed the use of social networks, while a report by The Economist states that over 2.5 billion people have installed at least one messaging app on their smartphone. Leveraging social messenger applications to interact with your customers adds another layer to your existing personalization capabilities.

Philips Lighting Singapore has released their own chatbot for their Singapore Facebook Page, allowing users to learn more about their products and services and buy products directly from Facebook Messenger.

Goldheart Jewelry Singapore is another example of a brand using a chatbot to help boost sales. To help users understand the value of the Goldheart brand and products, the bot tells stories about Goldheart’s Celestial and Arctica Ice diamonds, providing insight into their background. Beyond the story, the user gets to interact throughout the bot experience. For example, it is possible to take a personality quizzes which they use to choose the perfect ring for the user or their significant other.
Social messengers offer a lot of potential for brands. Expect more brands in the next year to invest in their messaging channels by adding the ability to purchase directly or with own unique chatbot personality.

The Brand.com model, in which individual brands sell products on their own website, has certain advantages over selling on marketplaces. With their own websites, brands are at liberty to develop their own design, structure, shipping options and promotions. However, with the growing traffic, it’s hard to resist the draw and popularity of the marketplaces.

Some brands, in order to keep their brand identity, have partnered with marketplaces to build their own stores within the marketplace, giving their customer new way to experience and shop for their products.

Levi’s have cooperated with several marketplaces around the world including Amazon and Lazada, to design their own store. Featuring the latest collections, promotions and product lines with a unique design, this strategy has helped Levi’s take full advantage of having their own independent store design as well as the traffic offered by popular marketplace.

Elsewhere, Danone, a French FMCG company, teamed with Lazada Group in order to build a series of online stores for Southeast Asia, with the Thailand store expected first in December. This joint venture moves beyond just simple e-commerce, also offering parents advice and information on the growth, development and nutritional needs of their children. Thanks to Lazada’s digital platforms, it is quick and simple to provide convenient ordering solutions, personalised services and exclusive content in collaboration with Danone.

With the popularity of online marketplaces in the region, brands will increasingly move towards these sites, while looking for ways to develop their own personalized pages as a means to stand out from their competition.

Blockchain is a relatively new concept, first gaining traction within the last decade. Though it is still in its infancy, people are now realizing the potential of this technology and are looking at how it can be applied to a number of different areas.

It is impossible to talk about blockchain without mentioning cryptocurrency. Originally developed as a core component of Bitcoin, blockchain saw success due to its decentralized nature and secure design. For now, Bitcoin remains as blockchains main application.

For e-commerce, the most immediate application would be adopting cryptocurrency as a payment option for customers. Otherwise, blockchain can also be used in the supply chain, transaction and delivery processes, offering a much safer and more efficient solution for recording and tracking.

Singapore has begun investing in blockchain directly, trialling their own cryptocurrency. Dubbed ‘Project Ubin’, their goal is to facilitate decentralized interbank payments. An initial proof of concept phase has already concluded, and the project is now beginning the second phase which will see software prototypes being tested and scrutinized. Results for this second phase are expected within the next year. The success of the project would solidify cryptocurrency and blockchain as a viable payment option.

In 2018, progress will depend on acceptance. While Japan has already embraced the technology, even recognizing blockchain based Bitcoin as legal tender, China has looked less favorably on the blockchain trend. With this, it is unknown how well blockchain and it’s cryptocurrency applications will fare in Southeast Asia, though Singapore has already shown interest in the technology.

Despite all this, blockchain technologies will see more significant investment worldwide, allowing development of many applications that will help make e-commerce more secure, more efficient and easier. While it is unlikely that any large scale application will come to fruition within the next few years, 2018 will likely see greater acceptance of blockchain based cryptocurrency for customers and some other smaller scale examples of the technology.

Finally, next year will see legislation changes that will greatly impact the e-commerce market worldwide. The General Data Protection Regulation (GDPR) is set to come into place in May 2018 which, though only affecting EU citizens, will likely create reverberations worldwide that will change the way customer data is handled. Online businesses in Southeast Asia will however need to accommodate for the new regulations as any data regarding an EU citizen must comply with the changes and be handled appropriately.

What this means for e-commerce is that retailers will need to actively get informed consent to collect and maintain any data on customers. Creating profiles can also count as data and so must be consented to, impacting marketing onsite. Data processing must also be reviewed, especially with outside companies such as logistics and delivery providers.

With Singapore being a key commercial partner for the EU, the largest partner in ASEAN, Singaporean businesses in particular will need to remain vigilant or otherwise face significant fines, though any globally focussed business should begin taking action. According to information management company Veritas’ study, fifty-six percent of respondents in Singapore fear they will be unable to meet the regulatory deadlines.

Other than the continuously improving experience of the customers, brands are actively looking for new markets and opportunities that will connect them with new customers. AIG Malaysia started selling on Lazada, Shopeeise experimenting with mobile day on 9/9. New initiatives are enabling e-commerce to blossom in SEA through cooperation and innovation. These present new opportunities as well as threats to the existing and new businesses.

With availability of the latest innovations and services from international brands being rather lacklustre, Southeast Asia has taken it upon itself to develop their own services in their absence. So, with 2018 coming up, we look forward to seeing a lot of new innovations being brought to the market and developed to benefit more customers in SEA.